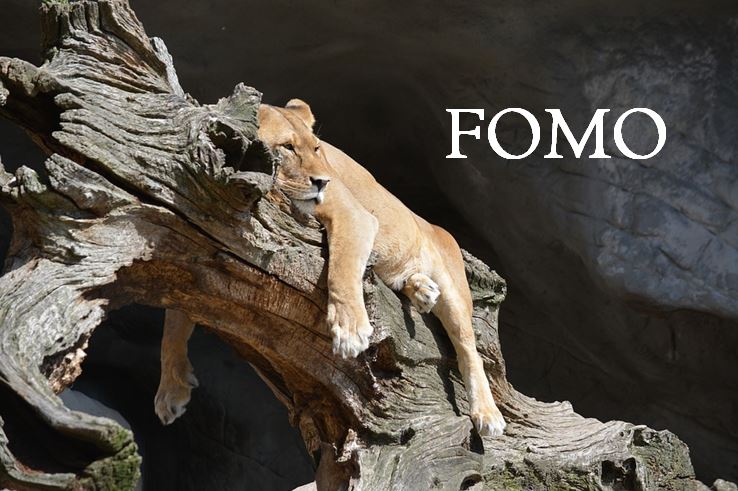 FOMO is really a thing. It’s a malady of the mind most generally characterized by a feverish inclination—perhaps even an obsession—to act upon a particular “opportunity” before it’s deemed the dreaded “TOO LATE!” Symptoms of FOMO often include anxiety and indecisiveness leading to irritability, insomnia, irrationality and, in extreme cases, a nasty rash.

Fear of missing out.

There are no exemptions. FOMO is an affliction to which no age, nationality, race, religion, gender, social status or economic rank is immune. And there is no vaccine. A person with FOMO is hijacked with the terror of missing that “once-in-a-lifetime” gig, often referenced in places like Wall Street (probably the most famous of all high-stakes casinos), on college campuses (epidemic among first-semester freshmen), amongst indiscriminate news junkies, and perhaps most notably, in singles’ bars.

While usually not fatal, FOMO has been known to lead to poverty, drunken episodes followed by indeterminate blackouts and miserable hangovers, night terrors involving Russian collusion in pre-K classrooms, and marriage/children/divorce (or just children). Currently there is no cure for FOMO so people exhibiting symptoms—especially bad decision-making—should be quarantined without electronic devices to aid in making bad decisions until such time as the fever passes. Unfortunately, this could take months. Or maybe it never passes.

As with most horror movies involving most monsters, any prospect driven by FOMO never really ends well. And we know that. Mostly. Nevertheless, we chase that “opportunity” anyway—even when every alarm in our heads is blasting like a Cat 5 tornado siren but still, we’re compelled to ignore that warning and chase the impending disaster. And why? Because we want that thing—whatever “that thing” is—and we know deep down that if we wait to hear from God, he’ll tell us to pass on that particular prospect. So we cover our ears and plow forward.

Fear, as we know, is the opposite of faith, and faith is the ability to trust God—no matter what. Faith equals trust. The problem is that sometimes we have less trouble trusting God to do something he tells us to do than to not do something he says to wait on. And why?

Because we’re afraid of missing out.

Eve was afraid of missing out in the Garden of Eden when the devil convinced her that God was withholding knowledge from her—the knowledge of good and evil. So, instead of doing any fact checking on his little accusation, Eve ate the magic apple that was supposed to infuse her with vast knowledge, understanding and insight. And we all know how that ended. Ironically, her IQ probably dropped several hundred points as she munched away.

FOMO often leads to heartbreaking losses in many areas: prosperity, reputation, love, opportunity—and most tragically, a loss of destiny. Or it changes a destiny forever. Abraham had received a promise from God that he would have a son with Sarah and birth an entire nation. However, it didn’t happen by the time Abraham thought it should and so he arranged to have a son with a younger woman. Eventually, Sarah had a son but the damage had already been done: Both of Abraham’s sons, Ishmael and Isaac, fathered nations and the Arabs and Jews have been at war ever since. And why? Because Abraham suffered from a severe case of FOMO—fear of missing out.

I wish I could say that FOMO is a thing of the past and that, as Christians led by the Spirit of God, we’re past all that. And we would be—if we listened to God. However, listening for God’s permission is often difficult, especially when we have a deadline to meet or that “opportunity” will—POOF—vanish. Instead, motivated by fear, we close our eyes, grit our teeth, and plunge all in.

And, given that, it doesn’t take a crystal ball to predict that God may allow that “opportunity” to crash and burn so that we don’t get the mistaken impression that any day we ignore God’s input is going to be a good one. God will not reinforce the idea that fear should be our motivator over faith. Let’s remember that as we’re destiny chasing.