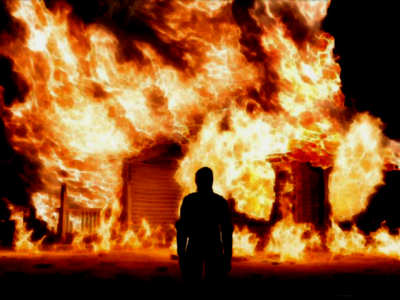 THE DEATH OF A DREAM—OR NOT?

The world is full of dead dreams. We’ve all had them—the degree we never managed to get, the business that never got started, the marriage that didn’t happen or failed, the ministry that got sidelined, the book deal that never materialized… the list could go on forever. And all around the world, millions are mourning their dead dreams as well. In the meantime, life goes on and we trudge forward, trying not to think about what we lost or never really had.

This is Easter week—a week during which, 2000 years ago, the dreams of many died an abrupt and bloody death. That’s because Jesus died. Jesus—the one who was supposed to save Israel from the cruel brutality of the Romans. The one who was supposed to get revenge for all of the vile and inhuman atrocities propagated by Roman rulers and soldiers: the horrific rapes of young Jewish virgins, the vicious slaughter of hundreds of babies, the oppressive and unbearable taxation of the Israelis, the horrendous crucifixion of Jewish “criminals,” the slavish orders given to ordinary people everyday… the never-ending terror that was life under Roman occupation. Jesus was supposed to end all that; he was supposed to establish his reign on earth and set right every wrong.

He was supposed to make life worth living.

I can only imagine the list that Peter and the disciples had for Jesus:

But that didn’t happen. Instead, Jesus died—and with his death, all of the dreams of all who had ever followed Him, hoping that He was the answer to their desperate prayers for salvation; those dreams all died, too. But what the people didn’t know—and what we often don’t know at the funeral of our own dreams—is that God had a much bigger plan for salvation than any of them could ever have imagined. It wasn’t just that God desired to save the Jewish nation from the hands of the Romans but His ultimate plan was to deliver all people from a much greater destroyer: SIN. And so Jesus shed His blood and died—and with His death, the Jewish people were not only delivered from the Romans, but also from themselves—from their own selfishness and greed and hatred and unforgiveness and prejudices and, and, and… And then, to demonstrate that an even greater dream had been fulfilled, Jesus rose from the dead and proved that He had also conquered DEATH.

How’s that for a dream fulfilled?

The salvation of man is a dream conceived in the heart of the Father—much more incomprehensible and vast than man could ever fathom. Even when Jesus told the disciples that He had to die, they didn’t get it. (We wouldn’t have either.) And they weren’t the first not to understand the scope of God’s plan; many in the Bible had dreams that they had yearned and pleaded for, decade after decade, and yet never saw come to pass—at least, not in the limited way they had hoped.

Abraham, for example, begged God for a son to inherit his estate, to preserve the family line—year in and year out he pleaded. But then all hope withered; he and Sarah grew too old to have a child and the dream became cold and dead.

But God had a bigger plan for them: His dream was not simply to establish just another family line upon the earth but to establish a nation—one that would last forever. Could Abraham and Sarah ever have fathomed such a plan? No.

But it did require one thing before coming to pass: the death of their ordinary dream.

Could Elizabeth, childless and disgraced, desperate for just one little baby, ever have imagined that God had a bigger dream for her: not just any baby but a prophet for the ages?

The Apostle Paul dreamed of spreading the gospel and for that, he braved extreme hardships: beatings, imprisonments, rejections by his own people, shipwrecks, murder attempts—all of which he was willing to endure to fulfill his vision of seeing people saved—in his time. Still, in the midst of those adversities, did he ever wonder whether his imminent death would bring a tragic end to the finite dream? But Paul did not die before God resurrected His own dream for Paul’s life: that Paul’s faithful letters would become the foundation of Scripture in the NT, impacting billions of people throughout all of history with the gospel. Never in his wildest dreams could Paul ever have imagined that his dream would be fulfilled that way.

Maybe your dream has died. Or maybe it’s simply in the tomb right now, awaiting its transformation into the dream that God has for you. Maybe it’s a dream much more colossal then you could ever imagine—just a seed right now, buried in the ground, waiting to blow up into a gigantic oak.

Maybe your dream isn’t dead. Maybe it’s about to be called forth from the grave.

6 thoughts on “Death of A Dream—Or Not?”