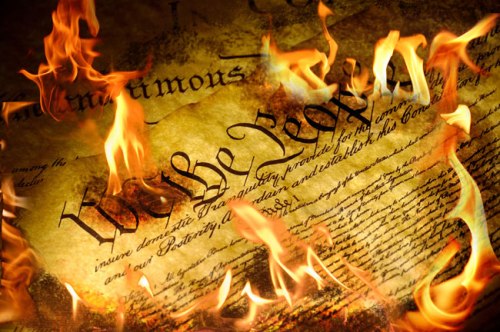 “We the People of the United States, in Order to form a more perfect Union, establish Justice, insure domestic Tranquility, provide for the common defense, promote the general Welfare, and secure the Blessings of Liberty to ourselves and our Posterity, do ordain and establish this Constitution of the United States of America.”

This, as you know, is the introduction (“preamble”) to the United States’ Constitution, and its purpose is to outline exactly what our government is supposed to do for “We the People”.

The government is supposed to secure the “Blessings of Liberty” for ourselves and our “Posterity”.  Our “liberties” are the rights which are given to us by law – and which, unfortunately, we’ve come to take for granted. These rights, established first in the Declaration of Independence, include the right to “life, liberty and the pursuit of happiness”. This means that our government cannot just up and kill us for political purposes (as happens in some countries); the government cannot deprive us of our freedom or “lock us up” without “just cause” and “due process”; and the government cannot interfere with our own individual decisions regarding what brings us happiness and fulfillment (unless we’re breaking a law in the pursuit). Furthermore, the government cannot deprive us of rights such as freedoms of speech, religious expression, assembly (gathering with others, including to protest), to have and bear arms, and many other rights. (See the Bill of Rights.) And finally, the government is supposed to “secure” these rights, meaning to make certain they are “guaranteed,” they’re “safe” for us and our “posterity,” our children.

Is this happening? No. In New York State, for example, citizens don’t have the right to “bear” arms; “Conceal and Carry” permits are very rare and only issued by judges when we can “prove” we need one and the burden of proof is tough. Most of us don’t have that Constitutional right anywhere in New York state. That’s terrifying when you think about it.

Is “religious freedom” secure? No, not when companies are being forced to comply with practices that violate their religious beliefs such as providing abortion coverage with medical benefits. Now I get that not everyone reading this may agree with businesses being allowed to exempt themselves via “violations of conscience” but keep in mind that if the government says they “must” violate their consciences, it may well say one day that you must as well.

Is “freedom of speech” secure? Not entirely. “Hate speech” is now against the law and carries severe penalties. While that may seem like a good idea, who determines what is hateful? That’s the scary part. If someone doesn’t like your opinion, suddenly it’s “hate speech”.

Our government is supposed to “establish Justice”.  “Justice” means that all laws and the punishments for violating them are fair and just; it means there is no partiality shown in favor of the rich and/or powerful. Unfortunately, the fact is that justice, as defined by the Constitution has been violated in Washington D.C. when powerful people there have disregarded laws and then not only not been convicted but not even charged. Other not-so-famous people have been both charged and convicted of the exact same crimes. Has justice then been served? Has our Constitution been upheld? If everyone is not held to the same standard as others, then no, it hasn’t.

Our government is supposed to “insure domestic Tranquility”. That means the government is obligated to keep the peace at home. Is this happening? No. Cities are burning as the authority of law enforcement (which is a government institution) is being undermined and even sabotaged. That’s a fact. And if our law enforcement at any level – local, state, or federal – is disregarded and disempowered, then there will be no “domestic tranquility”. Period. How can there be? Correct – there cannot. (Wait – there could be if “martial law” was declared and the military “kept the peace”. But I don’t think we really want to see that happen . . .)

Is this happening? No. Terrorist attacks inspired by radical Islam in this country are increasing in frequency – whether done by terrorists at home or those accessing the United States through leaky borders or the non-existent vetting of refugees or immigrants. Moreover, the “common defense” is being undermined by a continuous “downsizing” of military force and equipment. These are facts, not speculation.

So – is the United States government providing for the “common defense”? No.

Has this happened? No. The federal government has enacted policies detrimental to businesses, job growth, and general economic freedom in the market place. More government regulations on businesses result in fewer businesses established or able to stay in operation. This means fewer people employed and fewer people receiving paychecks, medical insurance and retirement benefits.

The state of our educational system is another “general welfare” failure in this country. Common Core? Not. Ditto the effects of failed energy production, healthcare, national debt, et cetera.

In short, the government has failed in the “general welfare” category.

I hope the point has been made that, above all else in this presidential election, we need to vote for those candidates who will stand for our Constitution and the rights it guarantees. If we don’t, it may well be one of the last votes we’ll ever be able to cast. Think I’m kidding? Voting is, essentially, a form of free speech, of expressing our opinions. If our freedom of speech disappears, I guarantee that our right to vote will do a quick vanishing act as well.

So – ROCK THE VOTE. But remember one thing as you step into the voting booth: No man or woman can ever guarantee your freedoms. Only the United States Constitution can do that.